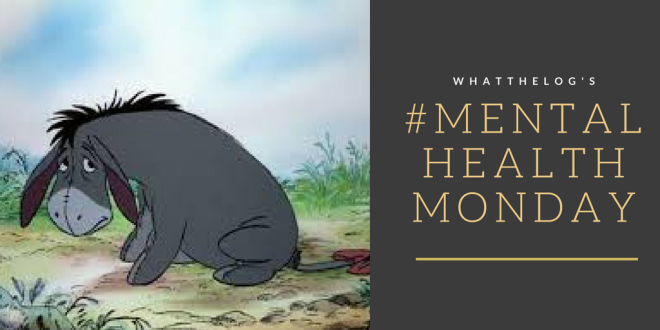 A couple of months back, I wrote a whole portfolio about Eeyore. (This was for my children’s publishing class in my Publishing MA). It was a lot of fun, and it made me think a lot about my depression, so I thought I would share some of my thoughts about him here!

First of all – I was obsessed with Winnie the Pooh when I was little. I would bounce around the house like Tigger and refuse to eat anything but honey. But over recent years it is Eeyore who has stood out as a character for me. As someone with chronic depression, his melancholic nature absolutely resonates with me. From his low, gravely voice to his catchphrases (“Thanks for noticin’ me”), he is the resident pessimist in the Hundred Acre Wood.

There’s actually a really interesting theory that all of the characters in Winnie the Pooh represent a different mental illness or neurodiversity – Piglet is anxiety, Tigger is ADD, etc. I can totally see this being a valid theory. Milne himself had PTSD from fighting in WW1. But Eeyore isn’t just his sadness – and that’s one of the things that makes him such a great character. He is firmly one of the Hundred Acre Wood, and his friends always ensure that he is included in their adventures. I love that!

The only other character who is comparable to Eeyore is Sadness from Inside Out. I want to do a whole post about Inside Out and how much it means to me, because Sadness is me. From the way she looks to the way she talks, I identify with her on a molecular level. (I’ve even got a Sadness plushie!)

I think that it is really interesting that we have these two characters in children’s media that so accurately talk about depression and being sad. But we definitely need more characters in order to normalise it! What other characters can you think of who are sad/have depression? This can be in kid’s or adult media!